Rescinding a Commercial Contract in The Bahamas 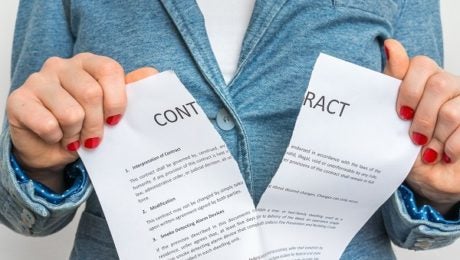 The concept of rescinding a commercial contract arises in business disputes when one party misled another party into signing an agreement. Rescission refers to the remedy available through the court to the wronged party who proves it was misled.

A contract is formed when one party makes an offer to do something, the other party accepts, and there is consideration for the agreement. When, however, one of the parties makes a material misrepresentation about the subject of the contract, the other party may agree to the contract without knowing the truth.

Companies that enter into commercial contracts may obtain rescission as a remedy for several other reasons, including both parties' mistake as to a material fact, a breach of warranty, or a material concealment. In order for the court to order rescission all of the events complained of must occur before the parties sign the contract, such as during the negotiations leading up to a written agreement.

Note that you cannot seek rescission of a contract for actions the parties take during performance of an executed contract. Those actions may constitute a breach of contract or may trigger a provision in the contract that requires termination. In either case, the remedy would be an award of damages and potentially, a discharge or termination of the contract. Any rights the parties may have received prior to discharge or termination will continue. In contrast, rescission does not result in rights continuing – the result is that the parties are in the same positions they would have been had the contract never been signed.

To find out more about commercial contract interpretation, visit Gonsalves-Sabola Chambers online or call the office at +1 242 326 6400.