Legislative Drafting and the Interpretation Act 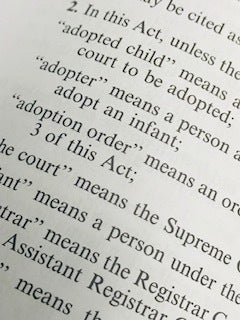 The Literal Rule of Interpretation advocates giving the literal meaning to a word used in order to arrive at the intention of the drafter. The Interpretation provision in an act, typically found at section 2, defines words when a special meaning is to be attributed to that word. However, some words are used repeatedly in legislation or are given a particular or official meaning. Such words are often defined in Interpretation Acts, for the purpose of obviating the necessity of defining them in discrete acts.

Yet we drafters continually define and redefine commonly used words such as “Minister” when there may really be no need to do so at all, as the word is usually defined in the Interpretation Act. However, on the other hand, there is much to be said for self-contained legislation, where one does not have to be flitting between other acts to fully understand the import of words used in the act.

The definition of a word as having a meaning given to it in another act may on the one hand be regarded as a somewhat lazy way of defining the word, which necessitates cross-referencing the other act on any occasion when it is sought to interpret the word. However, there is a useful purpose to be served by using this device, which is that it will automatically import any amendments made to the meaning of the word in the principal act.

It has been suggested that legislative drafters and others interpreting legislation should read and re-read the Interpretation Act from time to time in order to keep these definitions and meanings at hand whenever the necessity arises to attribute meaning to a statute. Unfortunately, some lawyers forget its existence.

Kim C. St. Rose nee Gonsalves-Sabola is a Legislative Drafting Consultant based in Saint Lucia. Mrs. St. Rose is an attorney-at-law of 34 years and the holder of an LL.M. (Dist.) (Legislative Drafting) from the University of the West Indies. She lists among her broad legal experience the supervision of the Legislativ...